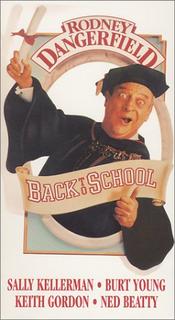 Eh, not really. But that line is relevant. For I, Kary D. Rogers, am going back to school tomorrow.

For what purpose? you ask. What upper-level degree are you pursuing? you wonder. Pshaw. I ain’t doin’ none o’ that.

After 4 years of undergrad (yes, I finished in exactly 4 years) I decided then and there I wished to take it no further. Nossiree, no master’s degree for me.

The class that I have signed up for is CO 2503 – Acting. And since I am an employee of the university, it’s free. Gratis. Pretty sweet, huh?

I figured since I’m interested in acting slash performing, I might as well take the class. I’ve talked to plenty of people who know and they all agree it’d be a good thing to do since it’s free. I’ve gotten a pretty good feel for the professor after talking to these unnamed knowledgeable people. I have corresponded with said professor via email to let her know that I am interested in taking the class. And that due to the nature of my job, sometimes I would not be able to make it but that doesn’t mean that I’m slacking or not putting forth any effort.

Then, while I was waiting on my enrollment paperwork to go through the admissions office, which took for-freakin’-ever, the class filled up.

Drat. Yes, that was it. That was the word that went through my noggin at that moment. Drat.

But the ol’ prof said she could squeeze me in. I guess I’m special or something.

I checked a few weeks later and someone must’ve dropped the class ’cause there was one seat available. Yippee. Also the instructor had changed. The name next to the class was different. So I IMDB’ed him. I feel pretty sure that’s him. I also found this and this. Don’t know if those are him or not. Time will tell my fair readers.

So I finally got my paperwork all in order and was ready to register for the class. Of course, the registration web page was down.

What?! Nobody informed me and I work with the people responsible for the registration system. What we have here is a failure to communicate or something.

On Monday, I see that the registration page is back up. I go to register and the. class. is. full.

Anyway, I checked again last night and there were two spots available. Apparently some suckers decided to drop the class. They probably got my threatening voice mail.

So I’m all signed up and ready for class which begins tomorrow.

I’ll prolly be so excited tonight that I won’t be able to sleep. I’ll get up two hours before the alarm goes off, iron my shirt and pants (actually I’ll wake up M. to do it for me cause me and the iron do not get along), I’ll pack my lunch and then sit on the couch until it’s time to go.

Of course then I’ll revert back to my college ways and fall asleep in class.