This is a spot the director, Lyle, and I did the Friday before the show opened. You can still see the show if you haven’t yet. Wednesday through Saturday at 7:30pm. 662-323-6855 for reservations.

I had originally posted a youtube link about the autistic kid that played in his high school basketball game. Not once but twice the link has died. Now I know why. CBS has made youtube pull it. I’ve found a few different versions but the one I linked was the best story presentation of the bunch. More via boingboing.

My last clip from the RWS Vaudeville show. This song closed the show and it was awesome. The Great Wall is a chinese eatery in the student union on campus. Sorry the sound sucks, we hope to actually shoot a music video of it this semester. Singer is Will Cooper and the dancer is Jonette Wilburn. Enjoy.

This is my first regular season production with Starkville Community Theatre. Last summer, as you may recall, was my first time on stage. I participated in SCT’s summer muscial revue. It was so much fun, I couldn’t wait to get back on stage at SCT.

This show has a fairly large cast of 12. Everybody is great and a pleasure to work with. Unfortunately, we’ve all been getting sick one-by-one. I had mine a couple weeks ago and every night when we come into rehearsal someone new is sick. Hopefully we’ll be able to push through and come off with a grand show. I think we will.

The director, Lyle, and his assistant director, Ellen, have been great and have made it a very easy and fun experience. They know what they want and communicate it clearly to the cast and crew. We’ve all had a lot of fun putting this show together and you can’t ask for more.

Come on out soon (tonight is sold out) and enjoy the show. I imagine you will jump in your seat at least once. 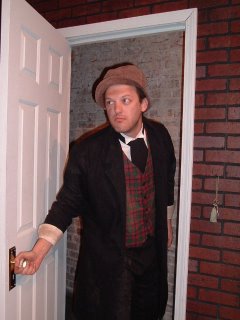 Here’s a clip from the RWS Vaudeville show. This is the Bucket, or in this case, Aquarium game. I’ll explain in the video. Oh, and the ending joke was a call-back to a previous game where Lily and I burnt down The Grove in Oxford (Oxford is where Ole Miss is located, our in-state rivals. The Grove is where they tailgate on gameday).

Here’s a sketch we performed at the RWS Vaudeville show on Feb 10th. Note that the last two lines can’t be heard very well due to laughter. They are:

Also, there’s a joke about Will’s wife going into labor and Joe’s the father. Will and Joe are two performers in the show. You kinda had to be at the show because a running theme was Will’s girlfiend/wife cheating on him with Joe.

When a friend asked me if MSU had any job openings, I accidentally sent the reply to my boss which resulted in the following convo:

me: heck yeah. what are you willing to do and how much dignity do you have is the question(s) though.
me: whoops
boss: er
me: ssorry wrong person
boss: um
me: somebody asked for a job at MSU
me: really
boss: well THAT certainly doesn’t require dignity

Then today I got the funniest (to me) spam for Viagra I’ve ever gotten. I then proceeded to IM the pic to my boss when I meant to send it to my co-worker. Luckily he didn’t actually get it. Though when I told him what happened, he threatened a harassment lawsuit.

Know any good jobs for a UNIX and network administrator?

Me: *looking at some display*
Lady: murmur murmur murmur smoke?
Me: Excuse me?
Lady: Sir, do you smoke?
Me: Uh. No.
Lady: I can’t find my husband and he locked the car and the cigarettes are in it. We’re from Smithville and we’re driving to [somewhere I don’t remember] and this is the only chance I’ll get. (as she walks off I hear) I’m gonna kill him

For this URL. I registered a domain and bought some hosting. All that’s left is the work of finding a design I like, customizing it, creating content and getting it published. Ok, that’s probably like 97% of the actual work of building a new website so it may be awhile before karyhead.com is open for business.

Meanwhile, RWS had the main stage show on Friday. It was Vaudeville themed and it was a hoot. If I can get my hands on a decent recording of it, I’ll post some clips. The main problem with the video (mine at least) is the sound is next to worthless. All you can hear is the audience’s raucous laughter. We have another show Thursday the 16th at the Wise Center. It’s a fund raiser for the Horseman’s Association.

Last night I had an audition for the next community theatre show, Smoke on the Mountain. It’s a musical comedy set in the 1930’s around a southern baptist Saturday night singin’. There’s so many talented people trying out (and people who can actually play an instrument) I doubt I’ll get a part. Plus I’ve been sick for a week and didn’t have much energy. The second half of the auditions are tonight.

I’m getting a better feel for my character at each rehearsal. At first it was hard not to make him funny, because that’s my nature, but the character, in general, isn’t the comic relief. He’s cohorts with the comic relief character. My character, Scrubbs, is a nasty fellow and it’s been hard to connect with him. When I first read the script I felt the least connected to him than some of the other characters so it’s been a fun challenge that I’m still working at. The set is looking great and the director, Lyle, has the whole show mapped out in his head, so he knows exactly what he wants and specifically what to ask for from the cast, so that’s been nice.

For those that saw the comedy show on Friday night, you’ll no doubt recall Will Cooper’s Great Wall song. It’s an original song written by himself to the tune of Aerosmith’s Dream On. It’s about his love for the Great Wall chinese eatery in the student union. It brought the house down, as they say. Well, we’re planning a video shoot. It’s. going. to. be. legendary. This was taped to the wall when I came into work this morning. My boss, Frank, wouldn’t pay up when I turned myself in.