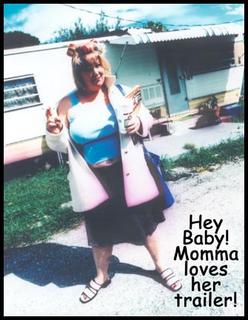 Well, it’s that time of year again. A time when little Timmy wanders around the trailer park with nothing on but his dirty little underwear. And you’re a bit surprised when you step out to go to work in the morning and see little Timmy squatting in your flower bed, digging down in the dirt with his little precious arm buried up to his sweet little elbow in your eight-dollar-a-bag soil looking for “fishinbait fore his paw.” Ain’t. that. cute.

Yes, it’s a time when the mullets venture out of doors baring their chest (and back) fur. They’re always doing something under that 1973 single wide Cavalier mobile home of theirs. Maybe a bit of a plumbing issue to correct? One can only hope.

Of course, you nod politely on your way to the car if they notice you and you hope to god that they don’t. It’s possible that they’d want your opinion as to what in the world is that funny looking fuzzy growth all up under their home. Well, one, you don’t like to look under your own home because it reminds you that yes, you made a poor decision years ago and you live in a home that was pulled, fully constructed, down the county road from a sales lot next to the Wal*Marts and then leveled and set up on bricks. And two, you sure as heck ain’t going to look under someone else’s home that may or may not have 3 and a quarter generations of the same family (which you suspect the family tree does not fork. much.) living in it.

Ah summer! The season of the very small plastic kiddie pools in yards all across the trailer parks of America. And maybe Earl will finally work on that junker car he towed into the park 8 years ago with hopes of restoring it and having him a sweet ride to take down to the river on weekends.

Southpaw, Natural Lite and other fine beers, once enjoyed on a sweltering summer night, their empty carcasses have now been discarded without care in yards and strewn into the road. Women, a banana clip, not seen in stores since 1986, in their hair and with a youngun on their hip, talk to friends on the phone about their eczema and the day’s episode of Ricky Lake. Honey, you better believe I’d know if my man was dressing up like a shellfish and meeting other crustacean-dresser-uppers for some weird hanky-panky. He couldn’t hide that from me. I keep my eye on him, I know everything he does, sister.

Oh glorious Mississippi humidity. Seeing the pit stains on your neighbor’s “You might be a Nascar-lovin-redneck if…” shirt (if he’s even wearing a shirt) is enough to make you stay inside all weekend with the AC set to 33. Just looking out the window coats your body in a lovely sheen of sweat.

Dogs, cats and other unidentified furry animals scurry under and around your car, being sure to leave their piss mark on your tires and their poop in your yard, preferably in the flower bed or the walk way to the porch where you just might step in it.

But it’s not without some good points. There’s always some entertaining drama going on and you can listen in on it because the trailers are so close together and you can hear everything going on next door just by sitting on your couch with the TV turned down low.

Well, like the time Jerry Dan found a full grown raccoon in the garbage dumpster and knocked it out with a shovel. He thought it would make a good pet so he brought it home to show Linda Sue. She was not thrilled with the idea of a pet raccoon and she told Jerry Dan so. He argued that it was a cute little critter and that he heard you could train them to fetch you a beer out of the refrigerator and stuff like that. They went round and round about it and we heard them stamping to and fro all the while yelling at each other.

But that noise didn’t hold a candle to the absolute ruckus that raccoon created when he came to. If you thought Linda Sue wasn’t happy about having a raccoon in the house, well ol’ Mr. ‘Coon was extremely upset at having his dinner interrupted and then waking up in a slightly-larger-than-average shoe box with a wicked-huge headache. The raccoon tore the ever-living hell out of Jerry Dan, Linda Sue and their impressive collection of Nascar nesting dolls before he escaped out the door and to freedom.

We could’ve heard that racket with the TV and radio all the way up to eleven.

That’s how it is ’round here in Tales From The Trailer Park.