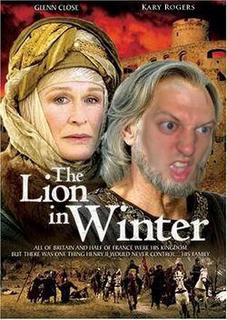 So I have my first ever “real” play audition this Sunday and Monday. It’s a really great show, I’ve read it and watched a movie of it. With none other Captain Jean-Luc, er, wait, I mean Patrick Stewart playing one of the leads. Of course I’m talking about The Lion In Winter.

It is a male-heavy ensemble. There’s Henry, ye olde king and Father to Richard, Geoffrey and John. Also there’s Philip the King o’ France. I couldn’t really play Henry since I’m not old enough (or experienced enough) but I’d be super-duper pleased if I get any one of the sons or Philip.

Props to Dave “Taterhead” P. for the sweet pic.

Also, I also saw my first show at SCT last night, “Seeing Stars In Dixie.” Maddy and Marianne, two wonderful ladies I met during the summer musical, were in it and they were great. It was a very enjoyable show and Maddy was a scene stealer.

Meanwhile, in acting class we’re doing monologues. We have to pick a monologue from a play and do it for the class. I’ve picked something from Rosencrantz and Guildenstern Are Dead. Great, funny play. The movie’s pretty good too. Thanks (again) to J. for introducing me to the movie back in high school. I bought the script years ago and saw MSU’s production of it when they did it a little while back.

Just for practice, I’m going to do my monologue now from memory.

Do you ever think of yourself as actually dead…lying in a box with a lid on it? Nor do I really…it’s silly to be depressed by it. I mean, one thinks of it like being alive in box, one keeps forgetting to take into account the fact that one is dead…which should make all the difference…shouldn’t it? I mean, you’d never know you were in a box. It would be just like being asleep in a box…not that I’d like to sleep in a box, mind you, not without any air…you’d wake up dead for a start, then where would you be…apart from inside a box. That’s the part I don’t like frankly. That’s why I don’t think of it.

Because you’d be helpless wouldn’t you? Stuffed in a box like that, I mean, you’d be in there forever. Even taking into account the fact that you’re dead, it isn’t a pleasant thought. Especially if you’re dead, really…ask yourself, if I asked you straight off, I’m going to stuff you in this box now, would you prefer to be alive or dead? Naturally you’d prefer to be alive. Life in a box is better than no life at all. I expect. You’d have a chance at least. You could lie there thinking, Well at least I’m not dead. In a minute someone’s going to come bang on the lid and tell me to come out. Hey you whatsyername! Come out of there!

There might be a few mistakes in there but that’s what’s in my head so I’m going with it.

E’rybody have a good weekend. Eat some pocky for me.

7 thoughts on “Big Cat In The Cold”