I am not pushing the fashion envelope. Really, I’m not. Don’t really want to. But sometimes I see something that I like, either in a store or in media and it turns out to be the Next Popular Thing. It’s happened and more than once. What really sucks is when I see something that I like in a magazine or on TV and there’s nowhere around here to buy it and I can’t find it on the internets. It’s happened and more than once. I have travelled many miles and made special trips to find something that I really liked in the past only to have it widely available weeks to months later.

The latest thing: a velvet blazer. You’re saying “But Kary, I’ve seen those around lots lately.” I know. I’ve been looking for 6 months at least. See, M and I watch What Not To Wear sometimes and I decided months ago that I liked Clinton’s velvet blazers that he wears every now and then on the show. I said “I must have one!”

Then I started see them more and more. In magazines about fall men’s fashion and on the Today show during a segment about fall men’s fashion and celebrities were wearing them etc etc. On the Today show they showed one like I want and even said the manufacturer’s name. I checked out said manufacturer’s website. Nothing. I found other labels that were carrying velvet blazers in their fall lineup and checked their websites and area stores that carried said labels. NOTHING.

Finally, I found a black pinstripe one on a website that also has a store an hour away in Tupelo. I called the store, they had plain black and brown but not the pinstripe. So I ordered it off the website and I’ve been pretty happy with it. But. I still wanted the burgundy/purple-ish color one.

M tried to track one down for my birthday in October. She called the manufacturer that we saw on the Today show and that I saw in a magazine. “Oh we don’t carry that color, there wasn’t enough interest in it.” What?! you showed it on national television and in a magazine. *sigh*

I’d pretty much given up and then M comes home from a trip to Tupelo last week with a surprise for me. Tada, she found one at the mall. It looks nice and I like it.

So last weekend we were in Tupelo and I’m looking around. EVERY STORE HAS VELVET BLAZERS. In about 5 different colors. Every designer seems to have one. WHERE WERE YOU MONTHS AGO?

Such is the frustrating price of living in Mississippi and having forward thinking taste in clothes. 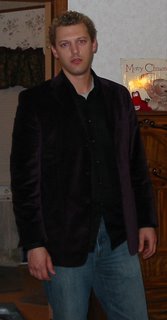 4 thoughts on “Today on Fashion Focus with Mr. KaryHead”