And, yes, we were rocking out to Creed. So hard.

No? Well it’s not very interesting, but I’ll tell you.

*cue transitional scene music* It was the summer of 1985. I was a young lad, clad in my green Izod shirt, out playing in the large yard of a neighboring house behind our apartment building. My brother, who is five years my senior, and some other kids liked to play back there because it was large and open but still had lots of trees and bushes and other foliage to play around and under.

It was a sunny day, a perfect day for…bleeding. From a gunshot wound. To the back.

Ok, well when I say gunshot wound, it was more like a BB, uh, shot wound. But it really hurt! See, we were playing and my brother was being the typical mean big brother and he threatened to shoot the other kids. He had one of those multi-pump BB guns. You could pump like 40 times and do some serious BB damage. So we all ran off back towards our apartment building.

Then, everything slowed down. My legs just wouldn’t move fast enough. I felt a white-hot heat on my back just before it exploded in pain. The next thing I know I’m being carried by some neighbors to our apartment. Mom’s on the phone calling dad and generally freaking out. I’m looking in the mirror at the bloody hole in my back and whimpering. I imagine my brother was hiding out at this point.

We make it to the emergency room and they dig around the hole in my back for about an hour and a half but they can’t find the BB. The hole goes about an inch and a half in. Eventually the doc says “oh well” and puts a bandage over the hole.

Excuse me, doc, but I don’t want this thing in my back for the rest of my life. What about metal detectors at the airport? I don’t want to be labeled as a terrorist. And what if Magneto walks by one day? You know he’ll sense that BB in my back and won’t be able to resist ripping it out of my body. THROUGH MY HEART. And I’ll have to explain to every X-Ray technician what that little white dot in my back is on the film.

Well, here we are 20 something years later and luckily I’ve only had to worry about the last one. But don’t think that when Magneto escapes from jail in X-Men 2 it didn’t scare the poop outta me.

If there was ever any doubt about where I live (redneck capitol), let me relate some of the events of today.

Last night I drove from my mother-in-law’s in Tupelo back home to Starkville to meet up with some friends. One in particular was visiting from Toronto where he runs his own casting company for print ads and commercials. I hadn’t seen him in a few years so it was cool to catch up and learn about his business.

I got up this morning to drive back to Tupelo (Nettleton, really) to pick up M and her younger sister to go to their dad’s family Thanksgiving dealio. First we needed to swing by the younger sister’s boyfriend’s trailer and pick him up.

She calls him on his cell phone to find out that his dad woke him up early that morning all in a tizzy. If rednecks have tizzys that is. It seems that his mom, who recently left his dad for another guy and had gotten into the meth making business, got locked up in the jailhouse. So he couldn’t come to the Thanksgiving dealio on account that his maw was locked up for making the meth.

Cut to the father-in-law’s family’s place. The teenage boys are out in the yard throwing the football around. Runnin’, jumpin’, shoutin’. That seems right, you know, an all-american kind of a thing to do. Except that some of ’em have cigarettes barely hanging from their lips as they run around. I thought you had to have been smoking at least 20 years to master the cigarette-barely-hanging-from-the-lips-while-engaging-in-some-sort-of-physical-activity trick. I guess not.

Then their 2 year old cousin comes up to me. He’s got some dark stuff around his mouth and he announces “I got some dip” and pulls his lip and cheek away from his gums to proudly prove that he does in fact have dip. He spits and then walks on. We asked the grandma if he really dips and she’s like “Yeah, he dips and chews tobacco.” Two. Years. Old. Ho-ly poop.

Well anyway, we were told that we’d be eating at 1:00pm but it was more like 1:45pm and I had to be back in Starkville for a meeting at 4:00pm (to which I was late) so we literally ate and ran.

The teenage boys were getting their huntin’ gear together to go shoot stuff and grandma was like “C ain’t goin’. His momma said for him to stay right here cause he’s grounded. He got all F’s.” Ouch. He’s about 15 and in the sixth grade. He’s failed many grades many times. Poor guy. Maybe if they had classes in runnin’, jumpin’, huntin’ and chewin’ he’d be more interested and do better.

That made for an interesting day. I won’t go into M’s mom’s alcoholic ex-boyfriend that showed up all but unannounced on Thanksgiving morning. 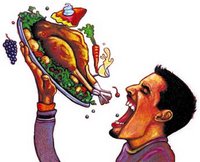 What am I thankful for? Today is a day to think about what things one is thankful for, I think. Though I have been under the impression that it was all about finding an excuse to eat so much that you want to die.

So. Thankful. Right. My wife, my family, my

Oh, the food’s ready. Sweet! Good thing we just installed that vomitorium. I can eat all day non-stop. Sonzyeah.