Actually I’m not but I could be with my new rock star hairdo. Check it.

For the first time in my life, I have straight(ish) hair. I’ve been thinking about doing this all summer and, well, I did it. This is not so much a Look At Me The Attention Whore post as a This Is An Important Life Event post.

The guy who does hair for the theater shows has a place in Columbus and he’s fabulous. Go to Jamie’s Salon and ask for Jansen (my bad if I misspelled that). Anyway, I talked to him a few nights ago at rehearsal and he said Come on in, I can totally do that.

So one of the other guys from the show, Lyle, was going to get his hair Jansenized too. I caught a ride with him and it was boys’ day at the salon.

It’s really different as I’ve never seen my hair like this before so it’s going to take some getting used to. I mean, I’ve only had insanely curly hair my whole life. Though the more I look at it, the more I like it.

And, of course, I have before and after pics. The “before” is from December. Since then, I’ve lost a bunch of hair and a bunch of weight. For all following pictures, clickify to biggify. (I didn’t really wear my hair like this out in public) 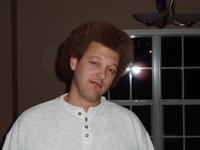 And a couple of quick, one-handed “after” snaps. (These aren’t very good, maybe I’ll to get some better ones up) 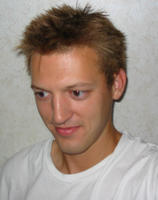 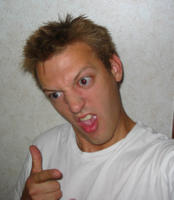 Oh boy! Summer hair fun. Do other people get an unexplainable urge to mess with their hair during the summer? The past couple of summers I’ve sprayed A Touch of Sun in it to lighten it up. Well I topped that one this year.

Who knows what it’ll look like in a couple of days. I ain’t got no hair doing skillz. I usually wet it and put anti-frizz crap in it. It takes all of 13.7 seconds. I think this will take more work. And I can’t get it wet for three days. I actually have a shower cap to wear in the shower. Teehee. 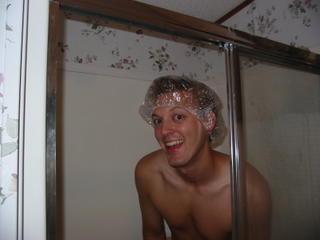