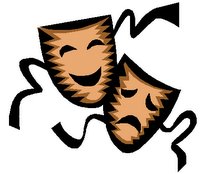 So last Friday I had the improv show. I was really nervous at the beginning of the week but by Friday I was just ready to make the funnay happen.

Highlights from the show:

-First game was Questions. In this game you and your partner are basically only allowed to ask questions to build the scene. If you make a statement or a non sequitur or repeat a question, you’re out and another person takes your place. (Rosencrantz and Guildernstern Are Dead, anyone?) Anyway, the setting, which was provided by the audience, was Hell. I’m about third in line and when it’s my turn, I open with “Is that a snowflake?” The other person says something to the effect of “What’s going on?” I comeback with “Did Mississippi State win a game?” Booyah, instant comedy. Actually for my first joke it got pretty good laughs (since our football team ain’t so good. When I say good I mean sucks.) Getting a big laugh early on relaxed me somewhat and gave me a bit of confidence.

-Will and Lily making out in Half Life and being in every other game together. They are both high energy people and they were fun to watch. After intermission when we came back into the lab theatre, Will and Lily went around the back way and were behind the “backdoor” in an embrace. So we all walk in the “front door” and the back door opens and there they are “caught” in an embrace. It was funny but I think you probably had to be there.

-Getting fondled in my first show. I was a prop in Living Scenery. In this game two people act out a scene and two other people are the props for the scene. Well I was a toilet and the other prop, er, person Derek was a wrench. And you know, uh, wrenches fiddle with nuts and bolts and stuff and well, uh, my nuts got fiddled with.

-I fell down or died a lot and by the end of the night, by knee was sore from where it was breaking my falls. Note to self, need a new falling technique.

There were other funny moments, but I can’t remember them all. It was a lot of fun and I look forward to the next show (probably February).

In other news, Story Theatre opened Tuesday morning. Having an actual audience (and children at that) made it so much more fun. For some reason I can’t quite identify, I didn’t feel very good about my performance on Tuesday. We did another show today and I felt a lot better about it but I can’t really put my finger on a reason.

I’ve learned sooo much in the last several weeks as we’ve put this show together. This is my first play and it’s been absolutely great. Our director Kevin Kern (also my teacher in the acting class) is very knowledgeable and he knows how to teach it to his students and cast. I’ve also learned a lot from the cast. They’re all younger than me by *ahem* a few years but they all have more stage experience than me and it’s been cool to learn from them. They’ve been totally awesome and have included me in their, uh, social interactions, which I appreciate.

If you are in the area you have two more opportunities to see the show: Thursday night the 17th at 7:30pm (general audience) and Friday morning the 18th at 9:30am (school children show).

I’ll be sad after Friday cause they’ll be no more shows or rehearsals. I won’t get to hang out with swell theatre MSU people much. But I’m looking forward to the next opportunity which is coming up in December at Starkville Community Theatre: auditions for Terror By Gaslight. I had so much fun and met so many great people at SCT over the summer for my first experience on the stage with the musical revue that I hope to get a part in the show cause I know it’ll be another great SCT experience.

Ok, that’s it for now. Harry Potter and Walk The Line open this weekend, I think. Gonna try to see ’em both.